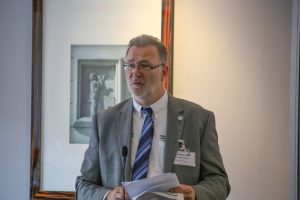 EUROMOVERS International, the global network of international removals and relocation companies, held its annual conference in Edinburgh between 25-28 May. The event attracted 85 delegates representing moving companies from as far afield as New Zealand, Brazil, Singapore and Thailand, as well as most countries in Europe.

For a group that is entirely business focussed, EUROMOVERS International enjoys an extraordinary ‘family feel’ with international partners and competitors alike coming together to work, learn and exchange business together in a totally relaxed environment. 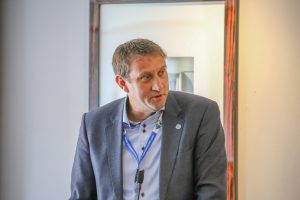 Thomas Juchum, EUROMOVERS’ General Manager, and Denis Zonneveld, the chairman from Dijkshoorn Euromovers in the Netherlands, opened the conference with their reports on the past year and plans for the future.

Denis explained that the EUROMOVERS membership had expanded in the last two years and the intention was to continue that trend by recruiting new members that comply with the organisation’s strict membership criteria.

Thomas said that the total number of consignments performed by members had exceeded 50,000 in 2016, almost do 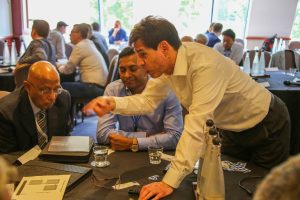 uble that of the previous two years. 94% of customers had reported the service to be ‘excellent’ or ‘good’ in 2016, a statistic that had remained extraordinarily constant over an extended period.

Business presentations were designed to educate, inform and, to some extent at least, entertain the delegates. They included information about a new digital removal platform that was already performing multiple moves in Europe and acting as both a threat and an opportunity for traditional operators; an innovative cardboard packing system that has the ability to replace wooden cases and so avoid the need for fumigation at destination; proposals for upgraded insurance that would smooth the claims process for customers; a look at brand development and management; and a new software system to help members manage their companies’ operations more effectively. 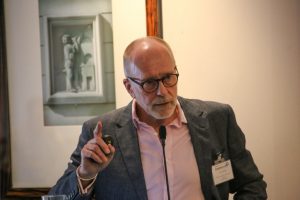 EUROMOVERS also took the opportunity for some internal reflection with a workshop facilitated by international move consultant Frank Lierz, designed to identify objectives and strategies for the group in the future. Ian Studd, the Director General of the British Association of Removers (BAR), was the guest of honour and provided the group with his personal thoughts on some of the post-Brexit challenges for the UK moving industry. The education was concluded with a distinguished guest speaker, Professor David Argyle, the Dean of the Royal (Dick) School of Veterinary Studies in Edinburgh. He explained some of his work including the cloning of the world’s first mammal, ‘Dolly’ the sheep, by the university’s Roslin Institute. 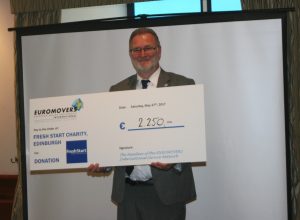 Thomas Juchum with the cheque for FreshStart

As part of its ongoing Corporate Social Responsibility (CSR) programme, EUROMOVERS organised a charity lottery in aid of ‘FreshStart’, a local charity that helps former homeless people get settled into new accommodation. Donations from members and from EUROMOVERS itself collected €2,250.

Being in Edinburgh the event would not have been complete without at least one highland-themed dinner including: a wee dram of the local whisky; Cullen Skink; haggis, neeps and tatties; and Scottish Salmon. Entertainment came from the Clanadonia Pipe and Drums who delivered a testosterone-packed wall of highland music that had everyone joining in and enjoying the quintessentially Scottish evening. 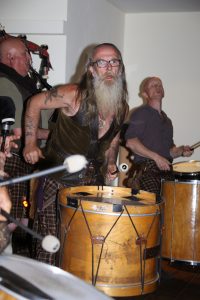 All editorial enquiries to:

This website or its third-party tools use cookies, which are necessary to its functioning and required to achieve the purposes illustrated in the cookie policy. If you want to know more or withdraw your consent to all or some of the cookies, please refer to the cookie policy. By closing this banner, scrolling this page, clicking a link or continuing to browse otherwise, you agree to the use of cookies.